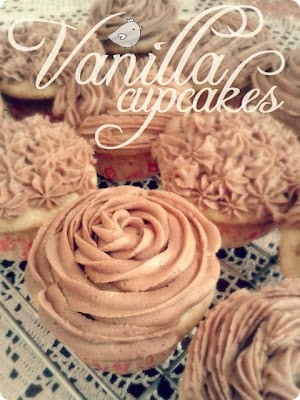 This makes a lovely light, moist cupcake with a creamy vanilla flavour. I have always avoided cupcakes with buttermilk, since we don’t often have it in the house, but after having a cupful left over after another recipe, I will now go buy buttermilk just to make these cupcakes.

Mix flour, baking powder, bicarb and salt.
Cream butter and sugar until light and fluffy. Add the egg and vanilla essence and beat again.
Fold half the flour mixture into the creamed butter mixture, followed by the buttermilk until almost mixed in. Then fold in the last half of the flour mixture.
Divide batter into muffin tins lined with cupcake cups.
Bake for about 18 minutes at 180C, or until a stick comes out clean from the centre of the cupcake.

I just made a simple chocolate butter icing with butter, icing sugar, cocoa and a little milk and then followed this tutorial to try out the rose shaped icing. I don’t have it waxed yet and a bigger icing nozzle will probably help, but that can just be a good excuse to keep baking 🙂

Are you ready for the tooth fairy? We don’t have

Baby blocks. Such a cute baby shower activity! A p

A princess party // What a fun way to celebrate tu

I’m a firm believer in taking photos to help rei

These hard hat party bowls where such a fun additi

I’ve honestly loved starting to feed the birds i

The new bunny mug may have broken, there may have