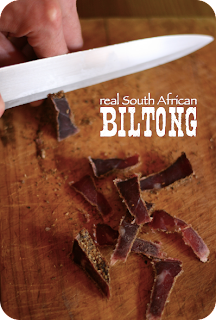 As a patriotic South African I must say that biltong is NOT beef jerky. Having never been to America I will trust the internet on this one 🙂 Biltong is dried, whereas beef jerky seems to be dehydrated (sometimes in an oven, i think). Apparently the spices used for jerky are also different, as well as cutting and preservatives used. But the purpose of this post isn’t to tune beef jerky, but rather to say “Biltong is fantastic”.

Last December my boyfriend, Michael, and I made a biltong box 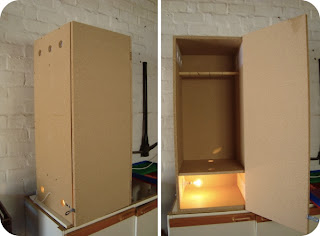 This is basically a box with a light at the bottom to make a dry and warm environment for the meat strips to dry. We put a piece of wooden dowel with some make-shift hooks across the top, a shelf near the bottom, with holes in it, to place some paper towel to catch any fat drips and holes along each side to allow air flow within the box. 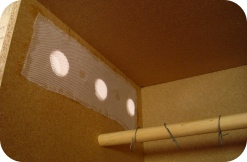 We glued some netting across the holes to prevent any flies getting in.

For our first few attempts we followed recipes and got gross results. Way too dry, way too salty, way too vinegary.

BUT, last week, we tried again. Yummy. Exact amounts were not recorded, but we now know what method we will follow.

We used silverside steak this time, unfortunately it had a few streaks of fat running through it. Topside is also good. Cut into strips (WITH the grain) about 5cm wide and 2 cm thick. remove all fat, it is gross after the meat has dried out.

Sprinkle some vinegar on the meat and rub the spice mix onto all sides. Leave in the fridge for 3- hours.
Before hanging, sprinkle some more vinegar onto the meat and wipe off the salty spice mix. we then add more spice mix, but without the salt (the meat will already have absorbed a lot of the salt!). Hang in the box (or a dry place away from flies) for about 4 days, depending on how hot/dry the weather is. You do not want the meat to be so dry that you need an axe to cut it. Dark and firm, with just a little bit of squidge is good. Personal preference is allowed. When dried cut into thin small pieces (across the grain). 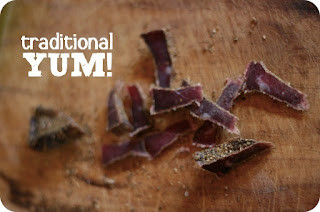 Anyone else always having to look for their keys?

A reminder to take photos in the mundane. Don’t

It feels so good to be posting actual blog posts a

Happy Valentine’s Day from our dollhouse to your

After nearly a year and a half (including a pregna

FIVE MONTHS // The little guy officially made it t

FOUR MONTHS // It feels like it’s gone both real